The Scoop:  Oopsie-daisy! Sega has accidentally launched the full game of Yakuza 6 instead of keeping it as a demo. It’s a lucky day for those Yakuza 6 Demo players.

Yesterday, Sega had released a demo version for their game Yakuza 6: The Song of Life for PlayStation 4. However, some demo players in North America managed to receive an accidental treat from Sega.

Even though the game has been labeled as a demo, many wondered why the game downloaded was a whopping 30GB. It seemed a bit bigger even when its just a demo game.

It turns out that the demo contains the entire game already. Europe and Australia players experienced a stop in their gameplay when they reached a point where further stages are locked.

In this state, players will be able to play where they left off when they have to unlock the next game via purchasing an unlock code.

For Free by Accident

However, in North America, it curiously kept on going. It seemed that Sega neglected to lock their game demo in this part. This made players access the supposed lock stages and the game kept on allowing them to pass stages and receive achievements.

Sega had discovered their error and pulled out the game from the North America store and issued an apology for the sudden recall. 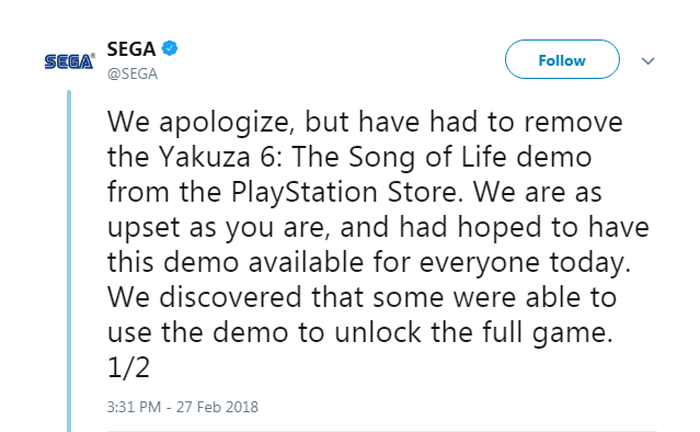 Furthermore, Yakuza isn’t supposed to be out until April 17.

So what do you think about those lucky players?

For more tech feeds to feed your mind, you can read more here!

7 Black Mirror Moments That Might Already Be in Real Life