Not the glittering weapon fights the fight, says the proverb, but rather the hero’s heart.

“They risked and persisted, sacrificed and saved,” explained Gibbs why the Ebola fighters are Time’s choice for 2014 most influential newsmakers. According to her, Ebola is a war and a warning. “The global health system is nowhere close to strong enough to keep us safe from infectious disease, and ‘us’ means everyone, not just those in faraway places where this is one threat among many that claim lives every day. The rest of the world can sleep at night because a group of men and women are willing to stand and fight.” she added. 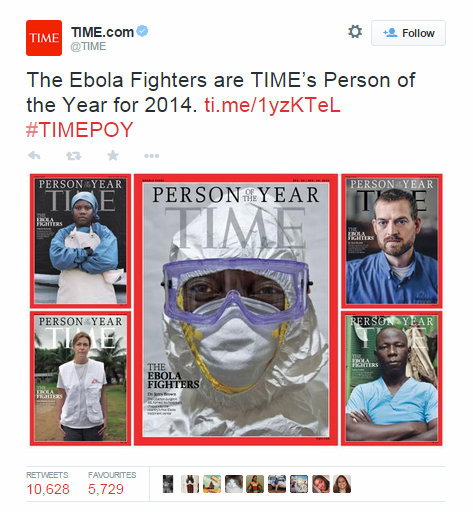 The issue has five different covers which include two doctors, an ambulance driver, a nurse and a health care worker, all are Ebola caregivers.

The Ebola outbreak struck West Africa, particularly in Sierra Leone, Guinea and Liberia which also spread to Nigeria this year. According to World Health Organization, it has claimed more than 6,000 lives.

Among the caregivers honored is Kaci Hickox, a 33-year-old nurse from Maine. She got caught up in the controversy about quarantining returning all workers who may have been exposed to Ebola. She also even witnessed how devastating it is in Sierra Leone “and have personally experienced the stigma that fear of this disease brings.” The nurse also added, “I do want to go back to West Africa, but for now, I’m taking things day by day.”

Time magazine’s person of the year is an individual or group of individuals chosen by the magazine’s editors who they think have the most influence on the world during the 12 months of the year.

While others question Taylor Swift’s inclusion for consideration, Gibbs credited the singer for her impact as a businesswoman this year and making the bold decision to pull all of her music off of the streaming service Spotify app.

Trends For Your Flimsy Little Clothing This December