You mean, there’s no more fierce competition and world-record-breaking to look forward to anymore?

It’s been more than a week since the closing ceremony at Rio, but some of us are still suffering from an Olympic hangover. Who isn’t going to miss the friendly rivalries, making bets or virtually rejoicing alongside the winners?

The summer games were about more than just muscles, meets or victories. Among 10,000 athletes from 200 countries, let’s relieve the “moments” of these 14 competitors who made lasting impressions on us viewers, inside and outside arena premises.

From his gold medals, to the memes and his last races before retirement, the world’s most decorated swimmer made headlines in and out of the pool. Sixteen years and 23 gold medals later, Phelps is choosing to say goodbye to his swimming days to focus more on family.

He even made an appearance at the VMAs, where he revealed what song he was listening to when his famous “death glare” meme went viral.

After guesting on the Ellen Degeneres show last March 2016, where she confessed her absolute admiration for Zac Efron, the 19 year-old gymnast was surprised by the actor himself during the Games.

It started with a good luck tweet, but Zac Efron flew to Brazil to show his support for Team USA. Aside from her four gold medals and a bronze, the first-time Olympian and best gymnast of all time was also given the honors of bearing the flag for the United States during the closing ceremony. 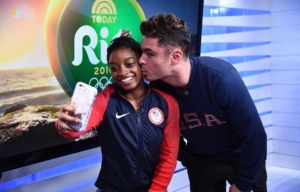 The blue-haired swimmer’s name floated all over the headlines after falsely reporting a crime at Rio. Deceived fans expressed their sentiments through the use of the Twitter hashtag #lochtegate.

Major sponsors, like Speedo and Polo Ralph Lauren, also decided to end their deals and cut ties with the swimmer.

Lochte was later on impersonated by Jimmy Fallon during the 2016 MTV VMAs – complete with the blue hair, uniform and gold medal around neck, which team mate Phelps totally enjoyed.

As one of the members of the first Refugee Olympic team, Yusra captured people’s hearts not because of what she won, but for her act of heroism before the team was even created. She was already a champion from the moment she risked her life to save her fellow Syrian refugees from drowning.

The runner obviously lives up to his surname. The viral photo of him crossing the finish line that “makes winning look easy” circulated the internet with speed as fast as his. Ellen Degeneres even made a meme that caused a slight racial controversy.

On the bright side, after being congratulated by the Prince himself, Bolt was challenged by Prince Harry to race for fun, again. 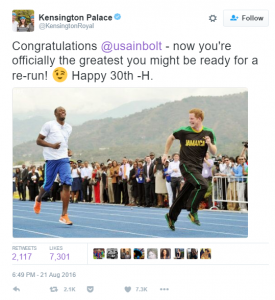 The woman who beat her own world record, “the only person in the swimming pool” for being 9 body lengths ahead of her opponents, and Michael Phelps’ female counterpart, Ledecky also dominated the pool. With five Olympic medals at the Rio Games, Ledecky is only getting started at 19 years old.

She also reenacted her childhood photo with Michael Phelps and even got medal arranging tips during their photoshoot from the legend himself. We’re sure this won’t be her last Games, or medals.

Another swimmer who shared the pool with his childhood idol was Joseph Schooling. Like Ledecky, he too had a photo taken with Phelps when he was little. Who would’ve thought it’d reach the point where he’d compete, and win, against the legend himself?

This is a perfect illustration of how working hard until your idols become your rivals is possible.

The French gymnast lands on the wrong foot, and literally makes “breaking” news as the cracking in his leg was heard by spectators around the arena. Despite his broken tibia and fibia, he left the arena with a smile on his face,”Even amidst my misfortune, it was an extraordinary moment”.

Dubbed as the “saddest gold-medalist”, North Korean gymnast Ri Se-Gwang, looks almost remorseful about his Games experience ending and having to go back to his country.

He was the third person ever from North Korea to win gold, but despite this feat, Ri Se-Gwang still had “oppression” written all over his face while being awarded on the podium. Viewers worldwide sympathized with him.

Lee Eun-ju (South Korea) and Hong Un-jong (North Korea) set the primary example of the Games bringing people together as they took a friendly selfie, casting aside the rules of diversity and rivalry between the teams – and nations. 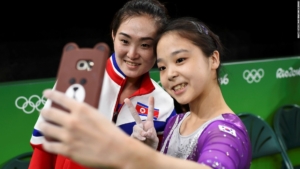 Chinese swimmer nicknamed the Emoji Queen for her facial expressions. She stands out among the athletes because of her jolly and comical reactions. Most of it comes from being proud of herself for beating her personal record, and her bronze medal.

She also openly admitted to being in her period during the race and “breaking the sporting taboo” of bringing up the topic of female menstrual cycles.

“I already used all my mystic energy,” she says after her race. I guess you can say she is the “clown” fish among the sea of swimmers. 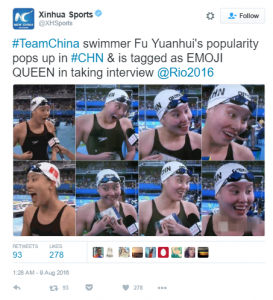 It was a double victory for Qin Kai as He Zi replied with a “yes” to his proposal.

Thumbs up to the Prime Minister of Japan, Shinzo Abe, who dressed up as Super Mario during the closing ceremony in commemoration of Japan hosting the 2020 Olympics. A creative entrance like his deserves all our attention. 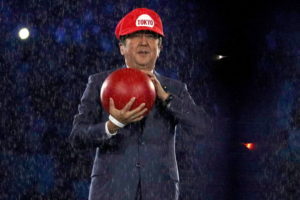 Four more years until the 2020 Olympics. It’s time to stock up on supplements and take on rigorous training exercises. Do we perhaps have what it takes to be an Olympian? What’re these athletes’ secrets?

If this Games’ participants surprised you, wait until you witness competitors who prove disabilities aren’t a hindrance. Watch them conquer the arena as they embody the qualities of being superhuman. There’s no such word as “limits” in their vocabulary. Whoever said athletes needed to be physically and mentally “perfect” has never given the Paralympics a chance.

Small is the New Big: Living in a Garage is In